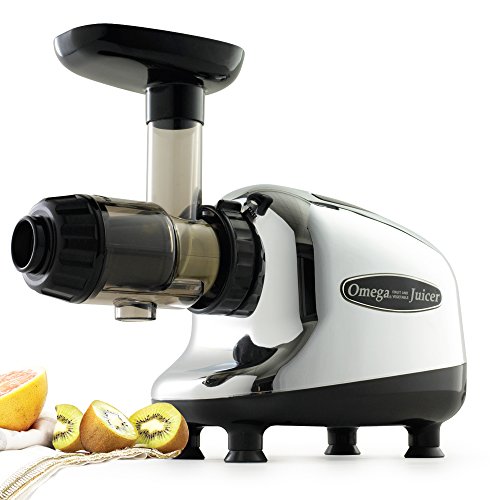 If you’re looking for the right juicer and you want to know have a household masticating juicer, J8005 might be the right one for you. Normally if we explore its features, benefits, and price options, we will be able to compare the similar juicers that are available. Omega J8005 Nutrition Center Single Gear household masticating juicer is mainly a low speed masticating juicer. It is a highly versatile juicer.Omega is a world leading juicer brand with distribution channels in over 120 countries. Quality is their main commitment. The Omega juicer 8005 is one of the most highly recommended juicers that you can have for your kitchen. It can be the perfect combination of your comfort and value.

What is So Interesting about the Omega 8005 Juicer?

There are many popular juicers exist in the market. But there are many interesting factors to consider while picking the perfect one for you. As Omega product, you can be sure about the quality. But there can be other factors which can keep Omega J8005 juicers apart from others as:

With this juicer, you can make pasta, mince garlic and herbs, prepare fresh baby food from all natural ingredients, whip a batch of soy milk, prepare peanut butter and ground coffee and so on. So, what this means is that once you have it in your kitchen, you can use it not just to produce juice from fruits and vegetables, but you can use it for so many other functions as well. So, apart from juicing as a juicer, you can also use this juicer as a food processor too. Basically you have six different nozzles to choose from.

We can summarize that the versatility of this omega juicer is quite priceless. That’s why it’s also one of the reasons why this juicer is truly worth it.

As a complete juicer, Omega J8005 is one of the highest juice yields that you can expect in the market today. You will be glad to know that, it has auto pulp-ejection function. Therefore, you can continuously feed it with fruits and vegetables and juicer automatically ejects the pulp. As a result, you don’t need to stop the machine now and then to make sure that it still works efficiently. For such continuous juicing, and you’ll get the juice in the best time possible.

The juicing system designed with this model gives you the best capability possible. Compared to other high-speed juicers, here you will get a dual-stage juicing system at a low speed of 80 rpms. In the process, it maintains a consistent natural taste without losing out any nutritional gain. It operates by first crushing fruits and vegetables. Because of this low speed, all the nutritional issues from the fruits and vegetables are protected. With such low speed also you can process your raw ingredients without having to worry about clogging and foaming. It also prevents heat build-up that can damage the juicer.

It is also oxidation prevented as well as all the healthy enzymes are maintained properly. Furthermore, it maintains the freshness and pure flavor of the juice without creating too much foam. It results in you to store the juice without having to worry about degradation for as long as 72 hours. Hence, in case if you can’t finish the juice, you prepared immediately, and you need to store it, you can easily do that. By this juicer, you can make delicious and nutritious drinks and snacks that everyone will love.

The J8005 operates by first crushing fruits and vegetables. In the first stage, the pulp is separated from the juice and sent to a second juicing stage where it’s pressed to get more juice. For this dual stage extraction, a higher yield ensures while maintaining a drier pulp output.

Because of all its proficiencies, Omega J8005 gives you a professional-level performance. As mentioned before it can be trusted commercially too, and chefs will certainly agree with you. Therefore, having this in your kitchen is useful.

With 110V the J8005 is a single-gear masticating juicer, and it comes in chrome and black. It weighs 17 pounds. Its appearance is also quite professional as it measures 7 inches wide, 15.5 inches deep, and 8.5 inches tall.

It’s also made with high-quality parts. The base is metal and parts are made by plastics. So, confirmed that it would last you a long time and serve you for all your juicing needs efficiently.

Comfort use is very vital to all the appliances. It is also one of the major qualities people intentionally look for when they’re selecting any juicer. You will be good to know that although 8005 is quite sophisticated in terms of its functionalities, it is user-friendly. There can be many other issues which are equally important.

At first, you assemble it quickly. As it has a few parts, it’s pretty easy to assemble. You need to take the main plastic element that contains the chute where you’ll place the raw materials and connect it onto the main body of the juicer. Then you should follow the guidelines as mentioned in Omega J8005 installation guide which shows all in details through diagram, pictures, guidelines and other instructions.

Now it’s time to prepare all the ingredients that you’re going to juice. You need to clean thoroughly and slice them into smaller pieces. Then, you need to turn on the juicer.  Now all you have to do is place the produce in the chute and pushing it one after the other onto the juicer. It will be a continuous process until you’ve juiced all the produce you have.

But juicing screen of J8005 a troublesome, not that we are complaining, but it would have helped to make the screen a bit wider. Otherwise, the Omega J8005 is a real pleasure to use.

It is advisable that cleaning the Omega 8005 juicer after you’ve used. The best part about this Omega juicer is that it only contains only five big parts that you can clean easily. Once more, the juicing screen is the problematic one since you will inevitably have to clean it between juicing cycles. This screen also has less surface area and the most challenging part of the cleaning is to remove the pulp that stuck to the juicing screen. It can linger the time it takes to juice and also cleaning process.

Other than that, you can take the parts of the juicer apart and clean it with hot water from the sink. You can use a nylon dish brush with dish soap; you can scrub the parts. In particular, you should try to remove the pulp from the screen. It will take only a little over 1 minute of your time. Otherwise, cleaning this juicer is not much of a big deal once juicing is complete, it takes about 10 minutes to remove everything of the earlier juice.

With overall 4.2 out of 5 stars on Amazon Omega 8005 has so many satisfied customers. In Amazon, this juicer even has 71% 5 star customers. Most of the Omega 8005 juicer reviews will tell you about the satisfactory of the users regarding the overall functionalities, fewer difficulties in operations and assemblies, etc. Considering all the customers are happy with this purchase. The cleaning procedure is really easy for most of the end users. For the users, it’s one of the best masticating juicers out in the market.

You can also find other positive reviews, including the simple way this juicer is structured. It is also very effective in preserving all of the nutrition in a better way, which is also good for health. The ten years warranty also made the users very happy. But people also told about very few cons as some people emphasize is that they have a hard time cleaning the juicing screen. Also, some people find the narrow feed chute. Many of them also didn’t like the issue that plastic used for many parts of the juicers.

You can get a fare compassion Omega 8005 with others as follows:

The Omega 8007 is a heavy-duty juicer in the same 8000 series. But both are different in terms of body shape and color. 8007 is silver. Its power is now 2 HP, and its parts are also BPA-free.

The 8008 also comes warranty of 15 years, and the parts are BPA-free. The color is in chrome. It is a much stronger juicer in terms of horsepower, compared to the 8005. You will also find that the funnel design is large and the juicing screen upgraded.

The VRT350 is more expensive than that of Omega 8005. But 8005 is also a lot more versatile especially when you want to do something else, like nut butter and others. The Omega series is also easier to clean and comfortable.

The Omega 8004 is a complete nutrition center commercial masticating juicer, but it’s close to the 8003 in weight. You will also get that its cost is quite same as the 8005, but it’s white, and the auger is ultem.

The 8006 is a certified bestseller in the Omega line of masticating juicers. It is almost the same in color like the 8005, but the auger is ultem. That means the auger is much stronger, so it’s ideal for heavy-duty juicing.

Omega Vert has mainly a crescent-shaped chute compared to the round chute of the 8005. Vert is best for juicing fruits and vegetables. However, it doesn’t allow you to make versatile stuff like pasta, baby food, and nut butter like Omega 8005.

Where can I get Omega 8005 replacement parts and accessories?

What’s The Best Price for the Omega 8005 and where can I buy it?

Nowadays it is very easy to find different market places for a product like an Omega including various retail stores and also big online vendors like Amazon. Amazon is well known for changing prices quite often and stays up to date. Even we can get Free Shopping offer from Amazon.

Verdict: Is This Juicer For You?

The Omega 8005 is a serious juicer for those who are seriously juicing and want to get a perfect solution for their kitchen. Therefore, if you’re serious to get the nutritional benefits of juicing, this juicer won’t disappoint you.

You should also remember that by this juicer, you can do many things other than only juicing. So, this juicer will definitely ensure you the best use of your money.

Christian Bramwell, MD uses his own weight loss story as teaching for people struggling with their own weight through blogging, teaching, and writing. His mission in life is to promote health and education, that is why he has chosen to be a family physician and found his own nonprofit Project RAK based on education and empowerment.